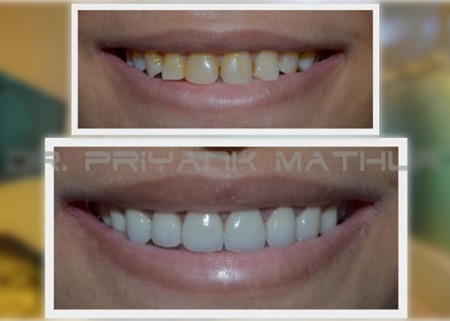 Shruti is a petite girl who again was rightly concerned about the appearance of her teeth and was looking forward for a complete smile and functional rejuvenation. Many a times it’s the maintenance of teeth which determine their health and appearance but in Shruti’s case it was just that the formation of teeth was not up to the mark which led to their discolouration and multiple decay lesions. Coupled with her habit of grinding teeth she could foresee an early collapse of her oral structures and thus her smile.

We began her treatment by making her teeth infection free with the use of root canal treatment for 12 teeth and performing a general cleaning for the rest. Next, we whitened the remaining teeth which were structurally unaffected with disease but were yellow in shade. This was followed by the final restorations on all the affected teeth, with full coverage 3M LAVA crowns on 12 teeth.

Such a case can be completed in as early as 2 weeks, but it took us around 6 weeks to finalise the result due to some technical delays with our laboratory work. But her smile in the end, made the wait worthwhile.

About the Author: Dr. Priyank Mathur

This article has been penned by Chief Implantologist and cosmetic dentist - Dr. Priyank Mathur, the founder of Smilekraft Dentistry. Having completed his B.D.S from Government Dental College, Mumbai in the year 2007, his dedication to provide life-changing dentistry led him to founding a private practice in Pune in the year 2008. Smilekraft Dental Clinic was then conveniently located in Pimple Saudagar, beside the then developing area of Wakad in the western suburb of Pune, India, the current location of the clinic. Following this, he went on to complete his Post Graduate Diploma in Implant and Aesthetic Dentistry from Nobel Biocare in the year 2011. This was followed by another Post Graduate Diploma in the field of Laser Dentistry in the year 2012 along with establishing Smilekraft Dentistry, to give his patients a painless experience by utilising the first Waterlase laser machine in Pune for his cosmetic and implant dentistry procedures. Thereafter, he received his Fellowship of the International Congress of Oral Implantologists in the year 2013, further increasing his credibility as a dental specialist in implantology. The opinions expressed herein are solely based on Dr. Mathur’s personal experiences with his patients over these years and medical findings as a practicing dentist.